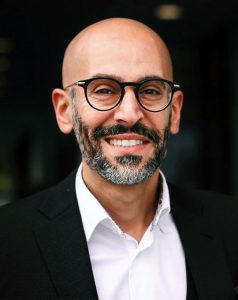 Marten Youssef is the inaugural Associate Vice-President of University Relations at the University of British Columbia’s Okanagan campus in Kelowna, BC.

Marten joined UBCO in January 2022 from TransLink in Vancouver, where he was the communications director since 2018. Before TransLink, Marten worked for BC’s Independent Investigations Office where he championed community engagement and accountability. Previously, he led the communications team for the United Nations Special Tribunal for Lebanon—the first international court prosecuting acts of terrorism.

His passion for social impact began at the start of his journalism career while reporting on human rights and justice issues throughout Africa. He has also worked as a reporter in BC and in the United Arab Emirates.

Marten holds a master’s of business administration from Beedie School of Business at Simon Fraser University, a BA in political science and government from Trinity Western University, and a graduate certificate in journalism from Langara College.

As a key member of UBC Okanagan leadership, Marten will focus on cultivating meaningful relationships within our campus community, the Okanagan and beyond to advance UBCO’s place on the world stage. Marten looks forward to working with a talented team to help share stories of exceptionalism of our students, faculty and staff.